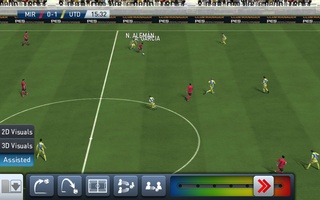 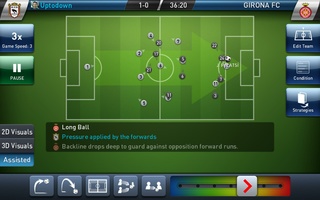 Advertisement
PES CLUB MANAGER is a sport management game with the PES (Pro Evolution Soccer) license, where you can create your own soccer team that you'll have complete control of. When putting the team together, you'll be able to choose the emblem, the equipment design, the name and city, among many other things.

In PES CLUB MANAGER, you have all the power. As manager, you must handle all of the aspects of your team: from choosing the starters and training, to the shooting order, and the intensity of the practices. In addition, you can also take care of signings, the creation of infrastructures for the club, and the development of new young players.

Managing the team from the office is great, but where PES CLUB MANAGER really stands out is during the matches. You can choose the perspective that you like whether it be in 2D or 3D. By default, the game is in 2D and in fast motion, but every time there's a dangerous play, the view changes to 3D, using the PES 2015 engine.

PES CLUB MANAGER is an excellent soccer manager game, that not only has dozens of options and official licenses for dozens of teams and thousands of players, it also has fantastic graphics. The only downfall is that it takes up a lot of space and could slow down less powerful devices.
Reviewed by Andrés López Translated by Sarah

Why is this app published on Uptodown?
(More information)

Why pescm my phone not install FIFA Soccer: Beta
A new generation of soccer games landed on Android
eFootball PES 2021
The most realistic soccer game on Android
Dream League Soccer 2019
Build the greatest soccer team, ever
8 Ball Pool
The best pool game for Android
FIFA Soccer
The 2021 / 2022 soccer season is now on Android
Rocket League Sideswipe
The long-awaited debut of Rocket League on Android
Carrom Pool
Get rid of all the tiles on the board
Dream League Soccer Classic
A great alternative to FIFA or PES for Android